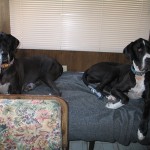 Now what do you do when you need a motor home small enough to get into those great camping spots in National Parks AND you have two Great Danes?

With our 1977 Dodge Establishment motor home, we were really happy with its compact, 20′ length. However, that left two little problems. Where to put our six-year-old Great Danes, Abbie and Ellie?

At first we had them on their bed on the floor by the bathroom, the only place the bed would fit. This of course, caused problems getting in and out of the bathroom. The door would clear the bed but not the Dane on top of the bed, who when sleeping is almost immovable. Having Danes on the floor is always problematic. With a 20′ motor home, our open floor space is about 28 square feet and their bed takes up about 9 square feet of that. Their bed was also at the entrance of the RV, forcing us to run the “doggy obstacle course” when getting in and out. And, although we were comfortable in our bed above the RV cab, it is much colder on the floor for them. And these two do not like it too hot or too cold. They are, after all, Danes.

We have a lovely sofa area at the back of the RV, surrounded by windows. It was a comfortable place to work on the laptop and for watching TV at the end of the day. The sofa also folds down into a 40″x76″ bed. After a few weeks of the Danes sleeping on the floor and us doing the bathroom shuffle, we decided to convert the sofa into a doggy bed. Having them at the back of the RV in their own area solved the problem of hopping over them at every turn. They are also much warmer during the cold months. During the warm months, they get a fan directed at them or, if we’re able to run the A/C, the vents flow the air right on their bed. They are very happy with the arrangement and it didn’t take them any time at all to get used to it.

So now they have about 20% of our living space! We’re also limited to watching TV at the kitchen table. The next project on our RV is going to be converting the kitchen table into a butcher block counter top along the side wall of the RV where we can eat/work. This will eliminate the facing bench chairs so we can put in reclining office chairs. It won’t bring back the sofa, but it will be a lot more comfortable. The kitchen conversion will be the subject of another article.

When Abbie was about two years old, we noticed her stumbling a little when out on walks, with the stumbling getting progressively worse. A trip to the vet revealed she has CSM (Wobbler’s Disease). She has responded well to very low doses of prednisone, 2.5mg every other day. Then, about two years later during a walk, Ellie couldn’t walk. Whereas Abbie’s condition was gradual, Ellie’s was devastatingly sudden. One minute she was running like the wind, the next minute she could barely stand up. The vet recommended a surgeon but after talking with him and his revealing the fact that the odds were she could be worse after surgery, we opted to take her home without the surgery. We spent weeks rehabilitating her and teaching her how to walk again. She now has a gimpy gait, but she does walk. As a result of her Wobbler’s, she has to be helped in and out of the RV as well as onto the bed. She’s also on a higher dose of prednisone, 2.5 mg per day, which has caused her to gain weight. Being senior citizens, we’re very conscious of her weight every time we pick her up! We remind each other to “lift with your legs” to protect your back.

Ellie has never been a big tail wagger and with her Wobbler’s, is even less so. But Abbie’s tail seems unusually long and she’s a huge tail wagger, even with her Wobbler’s. This fact coupled with living in the narrow confines of an RV created a big problem for her. She would wag her tail so violently in the RV (she is a happy dog) that it would actually split it open at the end! Telling her to stop only made her wag it that much harder. A trip to the vet (and many $$ later) produced a bandage at the end and a dose of antibiotics. The bandage didn’t even last until we got home. Searching the Internet, we found that this is a much more common problem with dogs than we realized, and the reason why many breeds’ tails are bobbed (a solution we actually considered!).

We tried taping PVC pipes and pill bottles on the end, but this had devastating effects on any human males in her tail vicinity. After much trial and error, we came up with a solution that has saved Abbie’s tail (and many a male). Using heavy duty, waterproof duct tape and foam pipe insulation, her tail is cushioned and protected and if she beats it against objects or people, it doesn’t hurt. The trick with using duct tape is that as little as possible of the sticky side is against her fur and the “apparatus” is changed often (preferably at night when she wags less) to let her tail breath. Also, we’ve found that prevention is much easier than taping it after her tail is already split open. We’ve outlined the steps of protecting her tail with accompanying photos.

With Ellie’s Wobbler’s, she tends to drag her bad leg. If left unprotected, she would rub her foot, nails and all, down to a nub. We tried pre-made dog booties but found them too stiff for her to walk in. Again, after much trial and error, we came up with a duct tape solution which provides her with a custom-made boot where no sticky side of the duct tape touches her skin. Also, the boot has to be changed every few days to let her foot breath. Her nails also have to be protected because they have a tendency to rub against her skin and cause sore spots.

It’s a delicate balance with walking her. If she gets too long of a walk, it overdoes it on her bad leg resulting with sore muscles. If she doesn’t get enough exercise, her leg muscles atrophy. She already needs help to urinate and defecate so weakening her back leg muscles only makes those tasks harder. Also, she wouldn’t miss our family walks for the world. Everyone who sees here swears she’s actually smiling when she’s out and about. We’ve included the steps for making a flexible, custom-made boot out of duct tape with accompanying photos.

Travelling with two Great Danes does pose interesting problems, especially Great Danes with Wobbler’s. But when you love your pets like we do, there’s no question that every problem has a solution. And considering the alternative, not having these two, has never entered out minds.